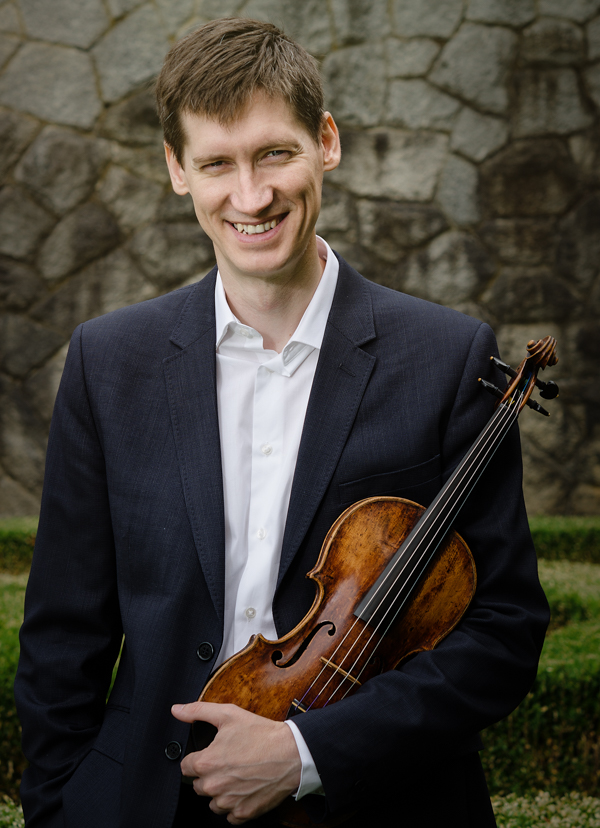 Karl Stobbe is recognized as one of Canada’s most accomplished violinists, known for his dedication to excellence on the violin and classical music in all its forms. As a concertmaster, soloist, and chamber musician, Karl has been an audience favorite in small settings and large venues. His diverse career has included performances of all six Ysaÿe Sonatas for Solo Violin, all 16 Beethoven String Quartets, and all 10 Mahler Symphonies. He feels equally comfortable directing an orchestra without conductor, performing as a soloist with orchestra, playing chamber music, or giving an unaccompanied recital. Noted for his generous, rich sound and long, poignant phrasing, he is described by the San Francisco Classical Voice as “an artist with soulful musicianship,” and by London’s Sunday Times as “a master soloist, recalling the golden age of violin playing... producing a breathtaking range of tone colours.”

Karl has performed in many of North America’s most famous concert halls, including Carnegie Hall, Jordan Hall, the National Arts Centre, Roy Thompson Hall, Segerstrom Hall, and the Orpheum Theatre. As a chamber musician, soloist, and orchestra director, he has shared the stage with many of the most important and eclectic violinists of our day, from James Ehnes to Mark O’Connor. Avie Records’ recording of Karl performing Ysaÿe’s Solo Violin Sonatas received worldwide attention, including Gramophone magazine which hailed it as “full of spirit and energy... exciting, fearless...” It was nominated for a 2015 JUNO Award for Best Classical Album. The year 2015 also saw the release of a live recording of Karl, joined by Jonathan Crow and the National Arts Centre Orchestra, for the title track of “Cobalt,” a CD of the music of Jocelyn Morlock. Karl frequently performs and records new music and has been involved in numerous commissions and world premieres.

Always looking to expand the concert stage, Karl has recently created a series of online concerts for digital concert platforms. Distinguished by his life-long love of the music for solo violin, this series features video recordings of all the unaccompanied violin repertoire of J.S. Bach. In honour of the 300 th anniversary of Bach’s famous Sonatas and Partitas for Solo Violin, it also explores Bach’s influence through video performances of other solo violin repertoire of music by Bartok, Ysaye, Prokofiev, Biber, and others.

A lover of all things violin, Karl completed a minor in Violin Repair and Construction while completing his Master’s of Music at Indiana University. His passion for the construction and mechanics of the violin is an important part of his professional musical life and continues to influence his performances and teaching. Karl never misses an opportunity to see and play exceptional violins and bows. He has given multiple presentations on the history of the violin family, violin building and repair, and organized exhibits and lecture recitals on rare, fine instruments at various concert halls, art galleries, universities, and conservatories. Karl plays on an exceptional and rare violin by Nicolas Lupot, in Paris, 1806.